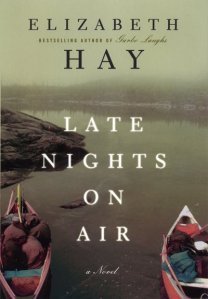 Elizabeth Hay’s Late Nights on Air conjures up the strange half-light of the northern summer, which also stands in for the half-remembered aura that is memory’s version of the past. It is a tale of Yellowknife, in Canada’s Northwest Territories, back in the 1970s. It is a book about nostalgia and loss: a loss only made worse by the fact that what is lost was never really possessed in the first place; it is the loss of what might have been or what should have been.

The story centers around a radio station and its unlikely employees: a semi-alcoholic acting manager suddenly promoted when the boss leaves town without warning; two young women who turn up unannounced looking for a job; an older woman receptionist who is the only one to stay on in this town of transients; a technician who hints at barely-concealed violence; a book critic who finally, and perhaps belatedly, discovers tenderness and love; and an indigenous woman who is at turns sympathetic and scathing about the presence of these white folk, all of whom are in some way lost in her ancestors’ lands.

The issue of the land, and who owns it or has the rights to it, forms the rumbling political backdrop to the book’s plot. A federal inquiry is underway into a proposed pipeline that would be built through the Arctic, the biggest private construction project in history. For perhaps the first time, however, the native people are being asked for their opinions and are starting to find their collective voice.

And if the land is the book’s backdrop (or subsoil), it is the apparently more insubstantial and fleeting qualities of voice and air that are front and center. Hay is interested in the way in which the voice can take on a life of its own, not least in the long nights through which a small team of broadcasters reach out to whoever may be listening, sleepless in the endless twilight.

On the radio, the presenters are invisible, but have to project a sense of presence and personality to an audience they have to imagine, literally, out of thin air. They are faced with the stark contrast between the tiny studio in which they speak into their microphones, and the vast tundra over which the radio waves will travel. They have to learn the trick that an older radio hand describes as “trying to be almost yourself. [. . .] You’re giving a performance as your natural self” (114).

And off air as much as on, each character, wounded and withdrawn in different ways from the previous lives that led them to seek refuge in the far-distant north, likewise struggles with the effort of performing their “natural” selves. They endeavor to make connections with the people around them, to get beyond their shynesses and inhibitions, their fear of (once again) losing out or becoming hurt. They learn to produce and to desire, to connect and to go beyond themselves.

The story’s centerpiece is a trip to the so-called barren lands, a desolate and uninhabited stretch of tundra on the other side of Great Slave Lake. For five weeks four friends canoe and camp in this remote wilderness, following the tracks of a disastrous early twentieth-century expedition that perished through starvation. This voyage is both the consummation and the downfall of their precarious community. At its end, nothing is the same, and they have to face up to the reality of “irretrievable loss” (303): first the sound recordings patiently gathered over the course of the expedition, though as nothing ever really decays at this latitude, there’s the possibility that someone will stumble across the tapes one day; and then an abrupt death that comes (again, literally) out of thin air.

A concluding couple of chapters offer a brief coda on the characters’ lives some years later: the transients all leave the Northwest Territories almost as soon as they return from their canoe expedition; two of them do pick up where they left off, though they are perhaps unaware that there was ever anything to leave off; but even the reconciliation and repose they manage to achieve remains troubled by the sense that this is still a substitute for what might have been.

The world is changing. Sometimes for the better, as with the final judicial report that at least delays the pipeline that would transform the Arctic’s delicate ecology. But sometimes for the worse, feels the character who had been the radio station’s acting manager in Yellowknife, as television’s literalness and homogeneity forces out the mystery and localism of radio. At the end, when he hears of one more death, and one more irretrievable loss, even though he has by now cemented new bonds the most comfort he can achieve is when “for some reason the tangle in his heart let go a little” (363).