Panama City feels like a cross between Havana and Hong Kong. Like Havana, its downtown “Casco Viejo” displays the faded elegance of dilapidated balconied buildings alongside ruined colonial churches. Though gentrification is driving out the working class families who lounge in living rooms that open right on to the street, for the time being the area is still edgy and cheap enough to be a backpacker’s dream. Like Hong Kong, on the other hand, on the other side of the bay the Panamanian capital is a city of high rises and unabated construction. Soon it is due to be home of nine of the ten tallest buildings in Latin America, and the speed at which the towers go up seems hardly to have been affected by the global financial crisis which elsewhere has hit property especially hard. 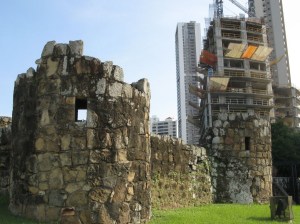 Panama spans the various epochs of colonialism that shaped first Havana, as one of the fortified cities shepherding silver and gold bullion from South American mines to Spanish ports, and then Hong Kong, as a vital node in a global network of free trade. Even now, Panama is shaped mostly by the wealth the flows through it, whether that be thanks to its new-found prominence at the end of the Central American gringo trail, or the combination of speculation and money-laundering that have fuelled its real estate boom.

Above all, Panama is still shaped by the canal without which it would never have existed as an independent country. You can sit and watch the container ships pass through the locks at either Miraflores (at the Pacific end of the transit) or Gatún (at the Caribbean). Each is carrying perhaps millions of dollars’ worth of merchandise, and paying hundreds of thousands for the privilege of taking its goods through the isthmus rather than the long way around South America, via Cape Horn. In turn, the size of the canal locks has long determined the breadth and length of the majority of the world’s ocean-going container fleet. Only now, with a new breed of “post-Panamax” ships, is the canal to be widened and deepened, at a cost of up to $5 billion.

Panama has always flourished by siphoning off some of the capital that flows through its borders. In turn, however, it has always been vulnerable to those who wish to prey on its own parasitism. In the sixteenth and seventeenth century, these were pirates, most notably the Welsh privateer Henry Morgan who destroyed the first incarnation of Panama City and repeatedly attacked the fortresses (such as San Lorenzo and Portobelo) that guarded its Caribbean flanks. Today the profiteers are the more anonymous and decidedly less romantic figures of the bankers, real estate agents, and construction interests, as well of course as the usual litany of corrupt official in the public sector.

For the spoils of Panama’s fortune have hardly been divided equally, and indeed have been the ruin of many. The canal itself, and the railway that preceded it, was only built at the cost of tens of thousands of lives from among the labor force that flocked from around the Caribbean and across the world. Some of the survivors’ descendants now live in cities such as Colón, which is essentially one large (and rather dangerous) slum, avoided by backpackers and speculators alike.

When I was in Colón, in a city-center mall with plenty of vacant store lots that had rather over-optimistically been built to attract cruise passengers, hundreds of senior citizens were patiently sitting in line. They were there to register with a scheme promulgated by the new president, Ricardo Martinelli, whose government has pledged them a pension of $100 a month. This handout is no doubt a populist gesture, but for those who aren’t in a position to start sailing under a black flag or Jolly Roger, such gestures are welcome.