[This is the text of a talk I gave at Haiti benefit at the University of British Columbia last week.]

As the TV footage and images circulated in newspapers and on the Internet attest, Haiti is in ruins. In towns near the epicenter of last week’s earthquake, up to 90% of the buildings have been damaged or destroyed. The capital, Port-au-Prince, has been devastated, and where homes, offices, hospitals, and schools (and so on) have not actually collapsed, they are very often now structurally unsound. It is relatively poor consolation to observe that this has been something of an equal-opportunities disaster. The national palace was reduced to a single storey, half the UN Mission’s compound was destroyed, and victims have included senators and the country’s Catholic archbishop. Still, as always, it is the poor who bear the brunt, and who face the greatest challenges in the earthquake’s aftermath. Hundreds of thousands are sleeping and living outside, fearful that aftershocks will bring down what precariously remains. Meanwhile, rescuers and rapid-response teams from abroad are returning home; it is very unlikely that any more survivors will emerge from the rubble. The air is filled with the stench of corpses that are buried under the debris. Ruination and decay are everywhere; the living are forced to cohabit with the dead, in a physical and social landscape scarred by destruction and haunted by the reminders of recent catastrophe.

Haitians are used to living within ruins. This is a land that has known more than its share of death and destruction. In the sixteenth century, Hispaniola’s indigenous inhabitants were decimated and ultimately wiped out by the disease, malnutrition, and violence unleashed by the arrival of Spanish imperialism. As the so-called “Pearl of the Antilles” the subsequent French colony of Saint Domingue was insatiable in its demand for slaves to work in the plantations that supplied sweet sugar for European tastes: over 800,000 Africans were imported from places such as the Ivory Coast, the Congo, and what is now Ghana, Nigeria, and even Mozambique from 1680 to 1776; more had continually to be transported because the rigors of the slave system meant that over half died within eight years of arrival in the colony. More recently, for a over quarter of a century, from 1957 to 1986, Haitians had to endure the dynastic dictatorship of François “Papa Doc” Duvalier and his son Jean-Claude or “Baby Doc,” whose feared paramilitary militia, the so-called “Tonton Macoutes,” anchored a reign of terror, brutality, and corruption. The name “Tonton Macoute” is borrowed from a folkloric bogeyman, a ghostly figure said to prowl the streets after dark looking to kidnap unwary children. It is no wonder that Haitian popular beliefs and religious practices (not least the African-inspired hybrid “voodoo” or vodou) are so concerned with the presence of death in life and life in death. It is easy to believe in zombies in Haiti, surrounded by the reminders of a violent past, a ruined present, and a precarious future.

Yet to view Haitian history in this light is all too often to imagine a land defined by its perpetual victimhood. Hence the constant references today to the commonplace that this is the poorest country in the hemisphere, and the appeal for compassion, to come to its citizens’ aid. Yes, we should certainly do all we can to help Haiti, and now more than ever. But not out of some kind of sympathy towards the weak and helpless at the fringes or margins of Western modernity. If anything, our relations with Haiti need to be transformed by a recognition of the country’s centrality and its people’s capacity and agency. For the truth is that, if we are to talk of responsibility or debt, we owe Haiti much more than Haiti can ever owe us. The country’s ruins are an indication of stubborn persistence and strength, as much as they also testify to the brutality and violence that the Haitians have had to suffer. 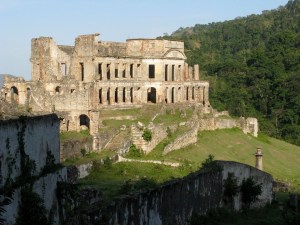 In February last year I traveled to Cap Haitien, the country’s former capital, to see some of the most extraordinary structures in the Americas, found near the now small and rather sleepy town of Milot, where the northern plain meets the mountainous interior. The Palace of Sans Souci was once the residence of Henri Christophe, who ruled as Henri I, sovereign of the independent kingdom of Northern Haiti from 1811 to 1820. It was then and still remains (even in ruins, product in part of an 1842 earthquake) a remarkable construction: built in a hybrid style influenced by a variety of European architectural traditions, it had sculptures, immense gardens, and an innovative and complex system of waterworks that functioned as a form of air conditioning. Sans Souci bears comparison with any palace or mansion in Europe or elsewhere. But the true marvel is a few miles further along. This is the building that inspired the Cuban writer Alejo Carpentier to conceive the concept of the “marvelous real” that has since (in the form of “magical realism”) come to define Latin America as a whole: the immense Citadelle Laferrière, the largest fortification in the Americas, which sits atop the 3,000 ft Bonnet a L’Eveque mountain that rises behind Milot to look out towards the Caribbean Sea. The Citadelle is Haiti’s iconic ruin, a mainstay of national iconography and source of fascination not only for Carpentier but also for instance for the Martinican writer Aimé Césaire who would declare that Haiti was the fount of what he called négritude, which we might loosely translate as “black pride.” For the Citadelle is a ruin that indicates not helplessness and victimhood, but freedom and self-reliance.

The central fact about Haiti, the reason that this is perhaps the most significant country in the Americas, even the key site for Western modernity as a whole, is not its history of disaster and suffering, but its tradition of resistance and self-affirmation. Haiti’s protracted and violent revolution of 1791 to 1803 is the world’s only successful slave revolt and, more importantly still, its first truly modern revolution. It was in Haiti that the principle of universal emancipation was proclaimed and won. For while the framers of the American Declaration of Independence were prepared to live, more or less uneasily, with the continued practice of slavery, and while the French defenders of the so-called rights of “man” were still debating as to whether blacks could or should count as either men or citizens, Haitian slaves took matters into their own hands and fought for the notion that freedom, if it meant anything, had to be freedom for all. Emancipation had to be universal, or it was not truly emancipation. It is for this idea, and the stubborn insistence on defending it at all costs, that we owe Haiti.

Henri Christophe’s Citadelle Laferrière, then, is a reminder of the tenacity with which Haitians held on to their revolutionary achievement. Built, not without controversy (it was perhaps not the only or the best way to go about things) and at immense sacrificial labor (every stone, every cannon, every cannon ball had to be hauled up the mountain), the castle was to be the ultimate redoubt and defence should the French return once more to attempt to re-establish slavery. For Napoleon had indeed in 1801 already sent out an expedition in the charge of his brother-in-law Charles Leclerc, determined to recapture what had been by far the richest of all of France’s colonial possessions. It was then that Christophe had shown he was prepared to set Cap Haitien on fire (by way of example, he torched his own home first) rather than give the French any satisfaction or allow any return to the status quo ante. Sometimes, Christophe seemed to suggest, a ruin or two was the price one paid for a greater principle. So ruination does not always mean defeat: it can also invoke resistance (what is a ruin after all but what persists, despite everything?); it can be the positive product of a people taking history into their own hands, rather than simply the negative sign of yet another historic defeat.

None of this is to say that we should somehow perversely celebrate the latest ruins that litter Port-au-Prince and southern Haiti. Nor, far from it, that we should take Haitians’ historic self-reliance as an excuse not to help out now in their time of need. Haiti has been forced to go it alone too often, for instance during the nineteenth century when the United States and European powers long refused to recognize its independence, and France eventually did so only at the price of a massive indemnity that crippled the country’s economy with effects that continue into the present. Even worse have been the forms of intervention premised on either condescension or fear: the last thing that Haiti needs is yet another military occupation, and it is simply shocking how in recent days the situation of the masses in the devastated slums of Port-au-Prince has been framed as a security issue first and a humanitarian crisis only secondarily. To turn our backs on Haiti or to view it as a problem is to repeat the age-old ideology that can acknowledge only in distorted form the fact that Haiti poses a radical alternative within modernity: the novel but surely incontrovertible notion that a benefit for some should also be a benefit for all. Indeed, Haiti and its ruins teach us that if we refuse to share a benefit universally, without prejudice of race, gender, nationality, sexual orientation (and so on), then it is not a benefit but a privilege whose raison d’être is exclusion. We should help Haitians now not because they need us, but because we need them. 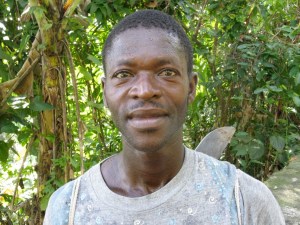