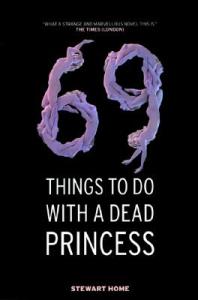 It’s an insurance policy taken out against the possibility that a reader might somehow get past all the other blocks and barbs put in to repel her and find the text beautiful, or identify with the narrator, or otherwise recuperate the work in the conventional way.

I feel sure that this insurance policy works well enough, though it no doubt helps that most of the rest of the novel is a mishmash of unconvincing characterizations, half-baked book reviews, snippets of cultural theory, and inconsequential action that hardly adds up to a plot.

Still, there is something fascinating about the book, in perhaps the same way that bad pornography can itself be simultaneously a source of horror, wonder, and not a little humour. Moreover, 69 Things is a bracing challenge to what we may like (as well as dislike) about the dominant model of English novel-writing today.

On his own website, Home describes himself as “radically inauthentic” and characterizes his work “across a variety of media including performance, music, film, writing, installation, graphics etc.” as follows:

I have attempted to continually reforge the passage between theory and practice, and overcome the divisions not only between what in the contemporary world are generally canalized cultural pursuits but also to breach other separations such as those between politics and art, the private and the social.

In this line, the intent of 69 Things is very clearly to breach the boundaries between (for instance) high and low culture, good and bad taste, and narrative and cultural criticism. In itself, of course, it fails in this attempt because it does, after all, fall too easily under the label of “cult” fiction, which is the category that is allotted precisely to such works that set out to undo the very practice of categorization. And yet despite this almost pre-emptive move by which the market of cultural taste marginalizes any threat to its overall mechanisms of classification and hierarchization, the very violence and obscenity of Home’s writing is still perhaps enough to give at least pause for thought. This, presumably, is the basis for Turner’s rather grandiose assertion that “I really don’t think anyone who is at all interested in the study of literature has any business not knowing the work of Stewart Home.”

The novel’s premise is that a little-known cult novelist called K. L. Callan (apparently, Home’s own birth name) has written a book entitled (yes) 69 Things to Do with a Dead Princess, in which he outlines a grotesque conspiracy theory concerning Princess Diana’s death and the subsequent fate of her body. According to Callan, “Diana had actually been strangled to death Thugee-style at Balmoral by an unknown assailant,” the security services had than passed on her corpse to Callan himself, and he in turn “decided to take Diana around the Gordon District Stone Circle Trail as a means of luring tourists to the prehistoric delights of ancient Aberdeenshire.” Rumour had it, what’s more, that Callan’s interest in Diana’s corpse was more than simply touristic; many assumed “that he was the last man to give the people’s princess a proper seeing to” (67). On the tracks of this bizarre story, then, a man called Alan (who had once been known as Callum) has decided “to repeat the heroic journey detailed in 69 Things to Do with a Dead Princess” (67), testing its feasibility by hauling a ventriloquist’s dummy by the name of Dudley, weighted down with bricks for true authenticity, to all the sixty-nine stone circles described in the original text. He also takes with him a woman, called Anna Noon, whom he has met by chance in an Aberdeen bar; it is she who tells most of the tale we are reading, and she also who is the primary object of Alan’s (and sometimes, most disconcertingly of all, Dudley’s) sexual attentions at each of the prehistoric sites they visit. Along the way, Alan tells her about books and she reads his library as he is slowly disposing of it, preparing for his death. For Alan has come to Aberdeen to die, and Anna’s role is “to help him act out his death” (1).

So we have a gross send-up of the many conspiracy theories that circulate around contemporary celebrity, alongside the image of a prolonged death by narration or by reading as Alan passes on his literary prejudices: “Alan admired Kathy Acker but said he could never read through to the end of her books” (16), J. G. Ballard’s Cocaine Nights “didn’t have a lot to recommend it” (47), Robert McCrum is a “literary time-server” (78), W. G. Sebald a “voyeuristic professor” who purveyed “clichés and inanities” (96), while Julian Cope’s “drug-addled brain appeared incapable of producing coherent thought” (98), and so on. Interspersed between these snatches of guerrilla literary criticism are the numerous sex scenes, whose tone can vary within the same paragraph from parodies of delicacy (“My love descended upon me like shadows at dusk enveloping a pretty country town” [114]) to hard-core cliché (“I felt his dear hands groping between the lips of my palpitating sex [. . .]. I murmured that Alan should fill up my cunt, how hot it was in its longing for his prick” [114]).

In the process, as both literary student and sexual object, Anna experiences something of “an exchange of subjectivities” (23). Or as she puts it later, “Alan was melting into me. [. . .] If I could not expel Alan, then I had to gather him up, not to imprison him but to integrate him into my being” (141). And that is Home’s challenge, too: the other side of the avant-garde’s inevitable recuperation by the cultural marketplace is that even the most shocking of texts have somehow to be integrated, if not imprisoned. Home is daring us to “gather him up.”

I don’t think that the means by which Home will be recuperated is through humour: for all its plentiful flashes of a rather dark and mordant wit, 69 Things is not particularly funny. So I’d disagree with Nicholas Lezard (to be fair, reviewing a different Home novel, Blood Rites of the Bourgeoisie), who comments that “what’s lovely about Home is that he uses laughter to make you think”. There’s nothing very “lovely” (or, indeed, “homely”) about Home; his aesthetic of shock means that the affect here is almost all intended to be negative.

Other means of gathering up the avant-garde are either critical praise or public indifference, and surely Home gets plenty of both. But the combination of distastefulness in 69 Things, combined with its forceful assertion of a decidedly eclectic taste (all those harsh judgements against mediocrity!), puts the onus on us, its readers, to reconsider our own likes and dislikes. “OK,” Home seems to be saying, “so you don’t like this. Fine. What do you like, and why? Be as aggressive about your tastes as I am about mine.”

Finally, this is of course also a book about ruins, and about what can be done in and with ruins: take the corpse of a dead princess on an extended walking tour; converse eruditely about books and history; fuck and be fucked. The one point at which (I think) Anna Noon has a rather brighter idea than Alan is where she suggests that the two could (mis)treat other cultural sites just as they were scandalously acting out in and on the prehistoric remnants of north-east Scotland:

I suggested that we should visit all the supermarkets in Aberdeen and treat these excursions in much the same way as our trips to stone circles. Alan insisted that it would be difficult to have sex in those stores that lacked customer toilets. I told him that he was missing the point, which was poetic, he had to imagine himself living 3000 years from now and pretend he was visiting ruins. (103-4)

This is also the “poetic” force of Home’s book as a whole: that we should view the hallowed (and the unhallowed) institutions of the contemporary cultural marketplace as though they were ruins, act out their demise, and feel free to do in them what we like.

YouTube Link: Stuart Home on 69 Things to Do with a Dead Princess and the market.