America can be a maddening and frustrating place. Indeed, what is best about America–its boundless optimism and energy, its refusal to listen to naysayers–is also precisely what is so maddening. Moreover, this is as true (perhaps more so) of those who are not-quite Americans, who are in the process of becoming American. After all, nobody believes more in the American Dream than those who have yet to face up to the American Reality. 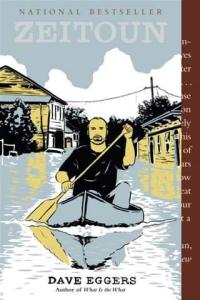 But the point of the American Dream is also that it is so often unfazed by its encounter with reality. Dave Eggers’s Zeitoun is a tale of one immigrant’s experience in America: a man who sees the very worst of that country, but who (we are told by the author recounting the story) still stubbornly continues to believe. Indeed, is this not why Eggers, a writer otherwise notable for his sense of nuance and irony, not least about the fashionable overuse of the term “irony,” has chosen Abdulrahman Zeitoun as the subject of his latest book?

The concluding words of Zeitoun, which are the last part of the “Author’s Thanks,” are dedicated to Zeitoun and his wife Kathy, who by this point we know have been through an appalling experience in New Orleans at the hands of Hurricane Katrina and (more horrifying still) the security services’ ferocious over-reaction in the aftermath of the hurricane. Eggers rightly praises the couple’s courage, which “knows no bounds,” but then concludes by upholding “their faith in family and country [that] renews the faith of us all” (337).

Yet this is a story that, by rights, should destroy any faith in country, even as it does very much remind us of the virtues of family–in this case what is very much a translnational and transcultural family whose shared passion is more the water that divide (and link) different countries, rather than any one homeland in particular.

The Zeitouns are Syrians who, we are told, repeatedly try to turn their backs on the sea, but to no avail. Abdulrahman’s father, Mahmoud, was born on Arward, “the only island off Syria” where “most boys grew up to be shipbuilders or fishermen” (23). Mahmoud himself worked on cargo boats criss-crossing the Eastern Mediterranean until one day he fell off a schooner’s main mast and found himself at sea for two days, clinging to a barrel, until he washed up ashore again in northern Syria. From that day he moved to the mainland, searching for a house as far inland as possible, and pronounced an edict that none of his children would go to sea. But in the end he settled on a home not fifty feet from the shore, and his sons were soon following his wake in their fascination for the water.

An older son, Mohammed, became a long-distance swimmer. Another, Ahmad, became a sea captain until he settled down in Malaga, Spain. Other Zeitouns found their way to Saudi Arabia. Abdulrahman himself spent ten years serving on multinational crews from Greece to Japan, Lagos to London, until eventually finding himself in the USA where he settled on dry land, met and married Kathy, an American convert to Islam, and had three children. In New Orleans, he became a successful businessman as owner of a company of painting contractors and manager of a collection of rental properties. But his attempt, too, to turn his back on the sea failed when Katrina swept through, broke the flimsy levees, and let the waters flood in.

As Kathy and the kids, along with most of the city’s population, seek safety and shelter elsewhere, Zeitoun stays. With the stubborn optimism of a hard-working immigrant, and as someone with no great fear of the elements, he felt he could do better weathering the storm and looking after his property. In the eerie silence that followed the hurricane, he paddled through the flooded streets in an old canoe, giving help where he could to its stranded inhabitants. He rescues people from their houses and feeds abandoned dogs, all the time bemused and angered by the failures of the police and other authorities who speed around in fast and noisy fan-powered boats. In his canoe, slowly and quietly navigating the waterlogged streets, Zeitoun is more attuned to the faint sounds of trapped home-owners and pets. But even when he does pass information on to the police, they seemed peculiarly uninterested in humanitarian rescue. Born out of paranoid fears of a city out of control, the official mandate, it seems, is security.

Here Zeitoun is caught up in a decidedly un-natural tragedy. Along with a couple of other fellow-survivors, he is forcibly apprehended by a posse of armed law-enforcement agents and taken to a secure facility that has been swiftly constructed in the downtown bus terminal. Known as “Camp Greyhound”, with its open, wire-fenced cells, its prisoners’ orange jumpsuits, and its guards’ callous insensitivity, the place bears more than a passing resemblance to other sites of extraordinary force and discipline such as Guantánamo Bay and Abu Ghraib.

Indeed, Zeitoun soon finds himself an exemplary subject of the current US state of exception. His detention, at the hands of a Federal Emergency Management Agency that has been folded into the post-9/11 Department of Homeland Security, abrogates all the conventional safeguards of a liberal judicial system. Zeitoun is not registered, not read his rights, not given access to a lawyer or a telephone. For all the world–and for his wife who has taken refuge in Arizona as much as for his brothers and sisters in Syria or Spain–he has simply disappeared. He has become a non-person. This is Kathy’s worst fear: as the Moslem wife of an American born in the Middle East, “she had not wanted their family to become collateral damage in a war that had no discernible fronts, no real shape, and no rules” (252).

Zeitoun spends almost a month incommunicado but unarraigned, uncharged, in Camp Greyhound and then the nearby Elayn Hunt Correctional Center. His companions, less lucky still (and with less property as security to secure bail when they are eventually charged), spend up to eight months incarcerated. When he finally managed to reunite with his family and return to the devastated city, at least the worst he has to face is mere incompetence: FEMA give them a trailer to live in, but no keys to access it. But there is never any attempt to compensate him for his experience. A lawsuit seems pointless: “Zeitoun’s ordeal was caused [. . .] by systemic ignorance and malfunction. [. . .] This wasn’t a case of a bad apple or two in the barrel. The barrel itself was rotten” (307).

With the suspension of all the usual guarantees, with the conversion of the state into a rogue force unconstrained by liberal niceties, “anything could happen. Anything had happened” (314). Or as Zeitoun reflects during his imprisonment, “there was something broken in the country, this was certain” (262).

Eggers tells us that Zeitoun’s conclusion is that “New Orleans, his home, needs no speeches, no squabbling, and no politics. It needs new flooring, new roofing, and new roofing, new windows and doors and stairs” (323). Perhaps we can take this two ways. If politics is simply equated with speeches and squabbling, then fair enough; and yet that means that New Orleans (and the USA as a whole) needs as much as anything a new politics. A new political constitution has to be built, even if it is never finished, just as a city is never ultimately completed but always in a process of (re)constitution.

Eggers, however, reads this anti-politics as an affirmation of “the faith of us all” in America. For Eggers, the system merely requires supplementing with charity–and the book’s profits are to go to a mixture of good causes under the umbrella of a “Zeitoun Foundation.” We need to go back to work, he suggests, with our faith in America renewed, ultimately unquestioned. And he uses this tale of a Syrian American immigrant and his family, a people of waters and the trade routes that are global rather than national, to articulate his decidedly conservative patriotism. Moreover, it is a patriotism that the story of Zeitoun–and that of so many others who have been caught up in a state of exception that itself knows no borders–should by rights decisively negate.