My friend and colleague Gastón Gordillo has started a blog, entitled “Space and Politics” (“Espacio y política”). I highly recommend it. 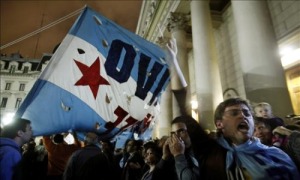 To date, Gastón has been mainly concerned with what he calls the “birth of Kirchnerism,” that is, the multitudinous energies unleashed in the wake of the death of Argentina’s ex-president Néstor Kirchner, and the way in which Kirchner’s ghost now haunts (and energizes) Argentine politics.

In a post comparing Peronism’s mythic 17th of October 1945 to the day of Kirchner’s death on the 27th of October 2010, Gastón writes:

Just as after 1945 it was clear that Perón was not alone, the principle message of the 27th of October is that from now on Cristina Kircher is not alone. There is a multitude mobilized behind her, that within hours showed that it could take over the country’s main public spaces when it felt that the government was in danger in a moment of possible weakness. Obviously this energy didn’t just appear out of thin air, but it was only with the emergence of a multitude that occupied public space that such popular support was transformed into a political vector worthy of respect.

It’s worth reading the whole thing, though in short I’d say that Gastón’s tone is a little more celebratory than mine would be. In the UK over recent years there have been a series of high profile deaths (from Diana to John Smith or Robin Cook, or even David Kelly) that at the time seemed to change everything… but looking back at them now, the public affects that they provoked seem strangely anomalous. Indeed, if anything any changes that they provoked have been only for the worse.

None of which really goes against Gastón’s thesis that the death of Néstor Kirchner has provided a space for the multitude to appear in a new way. My doubt is not so much about that, but rather about the way that (as Gastón himself suggests) such affects are all too soon and all too easily re-channeled for the sake of constituted power.