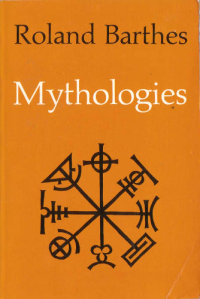 In Mythologies, Roland Barthes takes up the challenge posed by Ferdinand de Saussure in his Course in General Linguistics: to elaborate “semiology” as what Saussure terms “a science which studies the role of signs as part of social life” (15). Or to put this another way: Barthes takes the world around him as a social text, which can be read more or less like any other and in which the elements that compose it are almost as arbitrary as any other.

But the social text is only almost as arbitrary as any other; for Barthes, we also need “to pass from semiology to ideology” (128), that is, to recognize that the myths that structure the text of everyday life are politically motivated. To adapt a line from Marx: the ruling myths of each age have ever been the myths of its ruling class. There is therefore often a rather complex play between arbitrariness on one level and necessity (or, at least, political motivation) on another.

Wine is a perfect instance of this combination of extreme malleability and narrow determination. As Barthes observes, in France wine “supports a varied mythology which does not trouble about contradictions” (58). For example, “in cold weather it is associated with all the myths of being warm, and at the height of summer, with all the images of shade, with all things cool and sparkling” (60). Indeed, Barthes notes that the fundamental characteristic of wine as a signifier is less any particular content or signified to which it is attached than that it seems to effect a function of conversion or reversal, “extracting from objects their opposites–for instance, making a weak man strong or a silent one talkative” (58). And yet however much Barthes makes hay of this chain of associations and contradictions, there is a point at which the arbitrary play of significations ends. For wine is still, fundamentally, a commodity; in fact, it is big business. The analysis therefore concludes with a sort of determination in the last instance by the economy:

There are thus very engaging myths which are however not innocent. And the characteristic of our current alienation is precisely that wine cannot be an unalloyedly blissful substance, except if we wrongfully forget that it is also the product of an expropriation. (61)

Hence for this reason, if no other, Barthes is far from suggesting some kind of interpretative free play: there is clearly a right way to read the myth of wine, and a wrong way; if we leave out the fact of expropriation, we have ultimately not understood the myth or its social function.

Elsewhere the moment at which interpretation comes to an end is rather more complex, and perhaps more interesting. Take the essay on “Toys.” This is basically a critique of realism. Let us be clear: the problem with conventional French toys, Barthes argues, is not so much that they are gender-stereotyped, that for instance girls are to play with dolls and boys are given toy soldiers. It is, rather, that toys are almost always loaded with meaning: “French toys >always mean something, and this something is almost always entirely socialized” (53).

Toys constitute, in other words, what Barthes elsewhere terms a “work” in contradistinction to a “text”; they limit the range of uses to which they can be put. Indeed, they limit children’s activity and expectation of the world to one predicated on use, rather than pleasure; on interpretation, rather than creation. And for Barthes use and meaning are both forms of tyranny, and they are both essentially dead. As he says of modern toys that are “chemical in substance and colour,” they “die in fact very quickly, and once dead, they have no posthumous life for the child” (55).

What’s curious, however, is the reading that Barthes provides, by contrast, of wooden blocks. Such toys are closer to a text than a work: they have no pre-set meaning; they are not premised upon representation, and so do not depend upon interpretation; the child who plays with them “creates life, not property” (54). So far, so good. But the strange moment comes when Barthes associates the open textuality facilitated by such open-ended play with wood. In a sort of poetic reverie, he praises the many characteristics of a substance that is “an ideal material because of its firmness and softness, and the natural warmth of its touch. Wood removes, from all the forms which it supports, the wounding quality of angles which are too sharp, the chemical coldness of metal” (54).

It’s not obvious, after all, that wood is any more “natural” (or indeed, any less “chemical”) than metal. Here, the point at which the play of signification stops depends less upon a political analysis of exploitation and expropriation, and rather more on a very familiar contrast between nature and industry, tradition and modernity. In short, here at least Barthes seems to be caught in a myth that he has merely made his own.