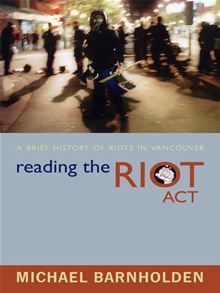 Michael Barnholden’s Reading the Riot Act: A Brief History of Riots in Vancouver is not a great book. But it’s a useful corrective to the notion that this city is (or even should be) immune to social disturbances. This June’s bit of social disorder may have been unusual, but it was far from unprecedented. Even the 1994 Stanley Cup Riot was far from the first of its kind–or the most significant.

We learn, for instance, that when it comes to sports riots it’s the 1963 and 1966 Grey Cup (Canadian Football) riots that were Vancouver’s largest, at least in terms of the number of participants and arrests. The 1963 melée started with a bit of over-zealous policing in the Castle Hotel beer parlour, and ended with 319 arrests, mostly for public drunkenness but also for unlawful assembly.

But it’s not just sports games that provoke Vancouverites to manifest their discontent. They also riot over music (the Rolling Stones Riot of 1972; the Guns ‘n’ Roses Riot of 2002) and even good old-fashioned politics. Or rather, bad politics as much as good. Barnholden’s survey begins with anti-Asian riots in 1907, when Chinatown and Japantown were both trashed. But they are followed swiftly by the Free Speech riots of 1909 and 1911, when the city authorities came down hard on agitation and organization promoted by the Industrial Workers of the World (the Wobblies).

An annotated list of other disturbances follows. There were then unemployment riots in the 1930s, anti-internment protests in the 1940s, counter-cultural riots in the 1970s, and anti-APEC riots in the 1990s. Barnholden doesn’t restrict his survey to the streets: he points also to a long history of prison riots at the BC Penitentiary.

So this is a useful aide mémoire to a century’s history of violent social protest (or protests that have been violently repressed) in Vancouver. Ultimately, however, the analysis of these incidents is both superficial and dogmatic.

It’s dogmatic in that the book provides us with a fairly schematic class analysis that purports to explain each of these incidents equally: “What all these events have in common is that they are essentially episodes in a larger ‘class war’ between the ‘governed’ and the ‘governors'” (18). And yet the very use of scare quotes around the key terms “class war,” “governed,” and “governors” already suggests that not even Barnholden really believes what he’s saying. Though class undoubtedly plays an important part (not least in the panic that arises when property is destroyed), almost each and every one of these outbursts of violence is rather more complicated than a simple face-off between governed and governors.

And the book is superficial precisely because it doesn’t want to get into complexities. Supposedly, we’re told, its aim is to redescribe these incidents from the bottom up, “to reread and rewrite a people’s history” (15). But this is a history that doesn’t, for example, involve interviewing any actual people or doing much if anything in the way of archival research. Instead, we get a précis of contemporaneous press reports followed swiftly by the ritual declaration that of course it was all about class.

Beyond the clichéd denunciation of capital, there’s hardly any attempt to embed this series of rather varied violent confrontations within a broader narrative of the city and its class politics, working class history, race relations, or the impact of mass culture (to take only a few obvious elements). By highlighting the brief, spectacular moments in which violence flares and glass is broken, Barnholden reminds us that there is a history to be told here. But he doesn’t tell it.

June’s riot here in Vancouver was gradually being forgotten (we realized that the sky hadn’t in fact fallen down on our heads), but then the disturbances in England rather rudely brought it briefly back into consciousness.

The observation that other people riot too (and the sky doesn’t fall down on their heads, either) should give the lie to some of the more ridiculous reactions to our own little affray. “World class” cities are just as likely, if not more so, to experience social disturbance of this sort. And I doubt anyone likes the English any the less (or any the more) than they did before the violence broke out. In the end, for better or worse–for better, I think–Vancouver’s just not so very special. It’s much like other cities its size in many ways. But with more mountains (and more rain).

It was strange to see elements that had marked Vancouver’s riot reaction mirrored or repeated in London. It’s true that in the British capital nobody was quite so stupid as to suggest that the rioters were somehow not the “real” Londoners. But there were some other tricks that they may have picked up from us.

For instance, there was an attempt make an exhibition of ostentatious community spirit by coming out with brooms and cleaning up the streets the morning after. But, as here, they found that the bulk of the work had already been done by municipal crews in the early hours. Local councils such as Croydon and Hackney politely said “Thanks but no thanks” though they took people’s phone numbers just in case. Not that it’s likely they ever got in touch later: public sector cuts already mean that there’s nobody even to manage volunteers. Unable to show off their civic virtue by volunteering, then, as in Vancouver people had to make do with scrawling graffiti or sticking post-it notes on boarded-up windows to convey their messages of pride and social scapegoating.

The big difference between Vancouver and England emerged in the courts. In London and Manchester all-night sittings of magistrates meant that hundreds of people were processed within days (effectively, hours), and some extraordinary sentences were handed down while everyone’s pulses were still racing: four years for a Facebook update, for instance, even though it was fairly obviously a joke (in however poor taste) that led to no violence at all.

Seeing the speed with which these grim punishments had been doled out rather woke us up over here as we were led to wonder if anyone had actually been charged over our own riot, some two months later. It seems in fact that two people have been charged, but none so far convicted. The police are still building their case,

The good citizens of Vancouver have reacted rather shame-facedly to this disparity between trigger-happy England and dilly-dallying Canada, asking why the wheels of justice couldn’t turn a little faster over here. But I’d have thought we might be proud of the fact that we haven’t resorted to the kneejerk response of what are effectively kangaroo courts under pressure from political rhetoric and general public hysteria.

In British Columbia, we still hang on to old liberal shibboleths such as the principle of the separation of powers. If we’re going to be smug (and we are), let’s be smug about that for a while.

Recently my friend Jerome Baconnier launched The Publishing Eye, a multimedia publishing operation that styles itself “visual culture for the conscious mind.” But this is also a visceral art that is emphatically affective and immediately appeals to (or rather, assaults) the physical senses. It is equally, then, visual culture for the embodied mind.

Take the Publishing Eye’s most ambitious undertaking to date, a hardback comic book by NeMo Balkanski called The FIB Chronicle. This is a beautiful object, with high production standards: glossy paper, robust binding, clean and crisp images. Perhaps then this is why the front cover has to be wrapped with police-style crime-scene tape warning that “this is not for children.” “Beware,” it seems to be saying: “Don’t let a pretty cover fool you.”

Indeed, on second glance the cover is not quite so pretty. What seems at first to be simply a generically noirish scene turns out to be the depiction of an interrogation with strong undercurrents of torture. A cartoonish pig is trussed up, its eyes black and blue and its face bloody, while all around, much more realistically drawn, are the shadowy figures of men in suits and uniforms. It’s as though the cute little animal of some classic children’s story has unexpectedly wandered into a darker and more violent world.

Or perhaps the cover is an indication that the conventions of the comic genre itself are to be mistreated and abused. Is the point that they will “squeal” and tell us what they know? Or are we just to glean some guilty enjoyment out of the exercise?

What follows, within the book’s elegant covers, are a series of short strips (each usually no more than a couple of pages long) that raucously parody popular cultural genres such as the police procedural, the private eye, the war story, or the fairy tale. The loose frame is the notion that these are secret files from the clandestine “Fabulous Investigations Bureau.” But the common theme is a scabrous anti-humour that effects a kind of scorched-earth assault on the very enterprise of drawing comics.

The very first story, for instance, features a “Detective Harddick” who while taking a shit in a back alley accidentally interrupts a man attacking a scantily-clad young woman. Somewhat to the detective’s surprise, the would-be killer runs of and his victim is saved. “Oh, How can I ever repay you?” she asks the cop in the final frame. “Well, how about a blow job?” he replies as they walk off arm in arm.

The drawing here is in the manner of Robert Crumb–an artist who is not exactly kid’s fare, but who is never quite so abrupt or so scathing. Instead of Crumb’s stoner antics or (increasingly) world-weary reflections on everyday life, Balkanski gives us psychopathic violence and institutional incompetence, sleaze, and corruption, leavened only by the toilet humor of public defecation. Nice, it isn’t.

One of the book’s very last strips also deals with the topic of an unexpected salvation with a bitter aftertaste. Here, the drawing style is closer to the tradition of surreal or stylized European animation. Jan Švankmajer, say. The setting is an un-named and undated wa: it could be World War II, it could be the more recent Balkan conflicts; an epaulette suggests the Croatian flag. An executioner and his sidekick are about to cut a man’s throat. But the trace of a “small ray of innocence” induces madness and allows the would-be victim to go free. Striding off, the reprieved man shouts out “Eat Shit and Die.” The end. 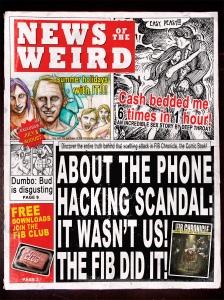 I can’t say that this is exactly my cup of tea, but that’s not really the point. It’s not supposed to be anybody’s cup of tea. Some, however, will take to it more easily than others. At times the stories seem to blur the line between a critical parody and indulgent fantasy. Or rather, this isn’t a critique: it’s an attempt to provoke revulsion; the danger is that the reader may be tempted to identify with (or rather, not to disidentify from) some of the many sad passions that the book lays bare. A parody of (say) misogyny or homophobia can be uncomfortably close to the real thing.

Still, this is an undoubtedly brave first “Publishing Eye” venture. It probes the limits of the comic-book form, and if it makes its readers squeal then I think that Jerome will be happy enough.