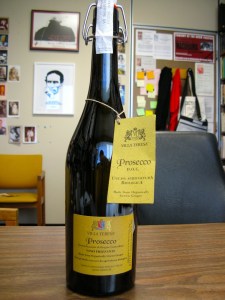 As I arrived at work this morning, someone I didn’t know shouted my name from across the street, and then came running over. He wanted to give me a bottle of Prosecco, for my talk last month on “From Access to Interactivity” at “Access 2011.” Many thanks to the librarians. Fine people!

And then this afternoon, the folk from the Modern Language Association were in touch. I’ve won a prize! Well sort of: an honorable mention. For “an outstanding book published in English or Spanish in the field of Latin American and Spanish literatures and cultures.”

Here’s what they say:

A study that moves elegantly and daringly from political theory to cultural analysis, Posthegemony: Political Theory and Latin America puts Latin America on the map as a complex region in which hegemony, habit, and affect are constantly being contested and renegotiated in response to the vitality of the multitude. Jon Beasley-Murray does this through a series of engaging discussions of contemporary theorists who dialogue directly with Latin American test cases highlighting the relation between Peronist populism, hegemony theory, and the limits of civil society. With clarity, intellectual rigor, and conceptual sophistication, Beasley-Murray seeks to challenge the dominant critical paradigms of the cultural-studies-oriented humanities and social sciences.

I think I may be drinking that Prosecco tonight.