The Saturday photo, part XIV: Alcatraz with its various clearly visible overlapping inscriptions, from the strident disciplinary to the militant indigenous to (below, rather more subdued) the museal sanctification as National Park: 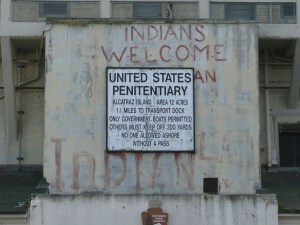 Alcatraz is definitely a ruin that bears the multiple traces of its repeated reinscriptions. Even what might otherwise have been a rather sober audio tour has to take note repeatedly of the way in which the rock and its prison have been figured by Hollywood. Much is made of the escape attempts, which threatened drama but ultimately failed to disturb the penitentiary regime. In the end, it was a combination of banal economics (the place was too expensive to run) and the slow 1960s move towards different philosophies of incarceration that did for the showpiece of America’s disciplinary regime.

The prison’s internal architecture does not follow the panopticon model: it has but a single cellblock, with the cells laid out in parallel thoroughfares rather than radiating from a central core. But the rock itself, in full view from the shores of the bay, offers a literally spectacular fable of the price of criminality. Much is made of the fact that prisoners could see the city, and occasionally hear (for instance) the sounds of New Year’s festivities at the Yacht Club. But nothing was said about the effect that having a prison in such plain view must have had on the psychic life of San Francisco itself.