I love Aki Kaurismaki, and here’s the trailer for The Man without a Past:

Best line: An electrician helps M to “borrow” power from the closest pylon and connect it to his container. When M enquires about his fees, the guy answers “Turn me over if you find me face down in a ditch one day.” 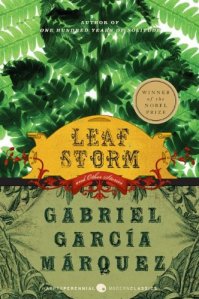 In Posthegemony I point out that “For all his fame as a novelist of magical realism, and so purportedly of surprise, creativity, and delight, Gabriel García Márquez is as much a writer of habit, tedium, and repetition” (178). This is nowhere more true than in the Colombian writer’s early novella, La hojarasca.

Of course, it is not as though García Márquez were only a writer of “habit, tedium, and repetition.” The very concept of the “hojarasca” or leaf storm that gives this book its title suggests the tumultuous forces of modernization and industrialization that tear through even a town as remote as Macondo (introduced here for the first time) in Colombia’s otherwise sleep Caribbean litoral:

Suddenly, as if a whirlwind had set down roots in the center of the town, the banana company arrived, pursued by the leaf storm. A whirling leaf storm had been stirred up, formed out of the human and material dregs of other towns, the chaff of a civil war that seemed ever more remote and unlikely.

Even here, though, in the story’s opening lines, there are some strange tensions. What does it mean for a whirlwind to “set down roots”? Even the exceptional becomes, somehow, rooted in the everyday–and isn’t this after all the classic formulation of magical realism? Or at least the whirlwind becomes routine until, just as suddenly as it arrived, it leaves.

For the events recounted in La hojarasca take place long after the leaf storm has up and left. And these events are minimal indeed: we are in a boarded-up house where an old man (a doctor who has long since abandoned his practice) has died, has committed suicide by hanging; another old man (a similarly long-retired colonel), with his daughter and her son, has come to the scene to prepare for the ensuing funeral. The dead man’s body is placed in a coffin; there is a minor disagreement with the mayor as to whether the burial can go ahead as planned; finally, it is agreed that it can, and the house door is forced open so the coffin can be carried out to the street. The whole action takes place over the course of exactly half an hour, between two and three o’clock on a Wednesday afternoon.

These small, ritual actions and the long pauses between them (the wait for the mayor to return in the suffocating heat) provoke a series of reflections and recollections on the part of the three members of the funeral party, and it is of these that the narrative consists: the old man and his daughter think back to their history with the dead man; the grandson observes them as they remember and considers what he might be doing otherwise, if it weren’t for this brief interruption to his routine. But even the history that the older two recount takes places almost entirely after the leaf storm has already departed, concerns long periods in which literally nothing happens, and focusses mainly on a couple of brief, dramatic interludes in which, again, stubbornly and unyieldingly, nothing happens.

Indeed, perhaps García Márquez’s genius resides, both here and elsewhere, in his masterly evocation of the intense drama he shows us can be found in anticlimax, in disappointment. In the end, everything takes place as it always would have taken place. García Márquez’s theme is this inexorability of a fate that at almost every point looked as though it could have been avoided, but never is.

While I’m posting videos and thinking about Neruda…

Here are the Brazilian Girls (perhaps my new favorite band; incidentally, they’re neither Brazilian nor, for the most part, girls) with a rendition of “Me gustas cuando callas”:

Sadly the visuals for the above video are far from inspiring. It’s worth seeing the song live. Here’s a performance from a couple of years ago in New York:

One of the things I like here is that this rendition is something of a performative contradiction: though the poem speaks of absence and a woman’s silence, in the person of singer Sabina Sciubba we see a woman very much present and the focus of attention (while the male members of the band hide behind their instruments) and it is her voice that sounds out, rather than being hushed.

Indeed, is she telling us to be quiet?

Meanwhile, Sciubba is renowned for hiding her eyes. So while making herself the center of visual attention, she also seems to want to resist the gaze. In her words, “I can do whatever the fuck I want because nobody is going to recognize me in the street.”

After a fun class yesterday on Neruda, in which students acted out Poem 15 from Veinte poemas de amor and then wrote letters or poems to the poet from the point of view of the woman or women he addresses (my favorite: “¿Pór que no te callas tú de vez en cuando?”), I was extolling the virtues of UBC undergraduates to some friends.

As further evidence, my buddy Alec mentioned the following video, produced by a UBC class in response to a now somewhat infamous article in Maclean’s arguing that Canadian universities are “too Asian”:

For more, see Tetsuro Shigematsu’s account of the making of the video, “Too Asian?”, and Brian Lamb’s take, “Is UBC ‘too Asian’? Let’s sing and find out”.

Gabriela Mistral was the first Latin American to be awarded the Nobel Prize for Literature, in 1945. To date, she is still the only Latin American woman to receive the prize. The prize citation states that her award recognizes “her lyric poetry which, inspired by powerful emotions, has made her name a symbol of the idealistic aspirations of the entire Latin American world.”

Introducing her before her banquet speech at the occasion of the prize-giving, the Swedish Academy’s representative stresses the geographical distance she has travelled: “From a distant continent, where the summer sun now shines, you have ventured the long journey to Gösta Berling’s land, when the darkness of winter broods at its deepest.” The implication here is that this voyage is some sort of novelty, that Mistral has been plucked from her naturally sunny climes to receive her award in frosty Northern Europe. In reality, however, the poet’s biography is marked by constant mobility: first in Chile itself, where she worked in secondary schools from Antofagasta in the north to Punta Arenas in the far south; and then, after leaving Chile in 1922, as she moved between consular posts and teaching positions in Mexico, France, Spain, Portugal, Guatemala, Brazil, Puerto Rico, and finally the continental USA where she was to die in 1957. In short, the long trip to Sweden was hardly Mistral’s only transatlantic or transhemispheric trip.

The Nobel prize committee’s point, however, is no doubt more metaphorical than literal: it may feel that “the darkness of winter broods at its deepest” in that Europe had only recently emerged from the Second World War. As the first post-war recipient of the Literature prize, Mistral’s task is to bring some Latin American optimism and “idealistic aspirations” to a climate in which, as German theorist Theodor Adorno suggested, it felt barbaric to write poetry in the wake of Auschwitz.

In response, Mistral says very little about herself and nothing about her (or indeed anybody else’s) literary work. She presents herself as the representative of Chilean democracy and Latin American culture, both of which tells us are indebted to European social democracy. In a speech whose hallmark is modesty and self-abnegation, she thanks “the cosmopolitan spirit of Alfred Nobel” for including Latin America within its remit and “the Swedish democratic tradition” for showing an openness to renovation while adhering to “the core of the old virtues, the acceptance of the present and the anticipation of the future.” If her prize signals the New World’s “idealistic aspirations,” Mistral is far from playing the part of enfant terrible or radical innovator. A stress rather on “tradition” and “heritage,” both her own and that of the hosts, is the keynote of her modest acceptance as part of the pantheon of global culture.

Links to student blogs on Latin American Literature since the 1820s:

Gabriel García Márquez‘s Cien años de soledad is a long, sprawling novel that lacks much in the way of a conventional plot. Rather, it is full of events and incidents, digressions and flashbacks or flashforwards, not least the famous flashforward with which the book opens:

Many years later, as he faced the firing squad, Colonel Aureliano Buendía was to remember that distant afternoon when his father took him to discover ice. (9)

In fact, in a further complication, this is a double flashforward: both to the story of the discovery of ice, recounted some twenty pages later; and to the story of Aureliano Buendía facing the firing squad, which will not be told for another several hundred pages.

But what does appear even in this opening sentence is one of the threads that connects and gives some sense to what might otherwise appear to be a jumble of narrative excess. For in what we take to be his final moments, by recalling the transmission of knowledge from father to son the colonel also highlights the theme of inheritance, of what is passed down from generation to generation. In short, of genealogy.

Still early on in the novel, for instance, we see how José Arcadio Buendía (Aureliano’s father) destroys or uses up his wife’s inheritance–a trove of colonial gold coins previously buried under the matrimonial bed (11)–in his misguided zeal for alchemical progress.

Equally, José Arcadio and his wife, Úrsula, fear that their very marriage may set trouble in store for their offspring. In that they are cousins, and they have heard that other cousins in the family who married gave birth to a child with a pig’s tail, they fear their children will likewise be monstrous. For months after their wedding, Úrsula refuses to allow the relationship to be consummated, out of fear for what might issue. They only start to reproduce after a neighbour, Prudencio Aguilar, mocks José Arcadio for his failure to bed his own wife. “If you bear iguanas, we’ll raise iguanas,” José Arcadio tells her.

Yet indirectly the future has already been set for the couple’s descendants. Spurred in defence of his honour to kill Prudencio Aguilar, José Arcadio has as a result to take Úrsula off in the founding Exodus that establishes the community of Macondo.

So Macondo is troubled from the start by the question of inheritance, of legitimacy, and the ways in which the sins of the fathers (and mothers) may be visited upon the sons (and daughters).

In other words, the novel is also troubled from the start by the ways in which, whether through incest or adultery or any number of other complications, the family tree soon becomes as unruly a structure as the narrative profusion that it is in part designed to contain and control.

Genealogy, intended to produce order and secure legitimate inheritance, is equally a source of disorder and confusion as Aureliano follows Arcadio but is followed in turn by other Arcadios and other Aurelianos. It becomes increasingly hard to keep up. The family tree is soon lost to the multitudinous forest.