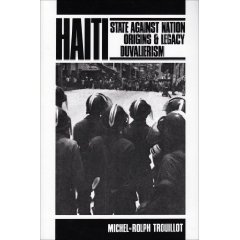 Michel-Rolph Trouillot’s Haiti: State Against Nation. The Origins and Legacy of Duvalierism is a comprehensive account of Haiti from independence in 1804 to the downfall of Jean-Claude (“Baby Doc”) Duvalier in 1986. Precisely the fact that Trouillot feels the need to go back to the early nineteenth century in order to explain Duvalierism demonstrates how deep-rooted he feels the problems that plague the country to be. And though the book concludes with the end of the Duvaliers, it hardly evidences much optimism for what would follow. As Trouillot confesses, “If wishes alone sufficed, I would have ended on a more cheerful note” (228). He is as scathing about intellectuals and others who opposed Duvalierism as he is of the sycophants who enabled it to survive so long: “For if the Duvalierists are understandably among the villains of the story, there is nevertheless no clear champion of the popular cause” (228).

One wonders what Trouillot made of the rise of Aristide and Lavalas. Unfortunately, as far as I can see he has published nothing on the topic–and my understanding is that sadly he has been quite seriously ill for some time, so is unlikely to write anything on Haiti again in the near future. He argues here, however, that “any solution to the Haitian crisis must face the peasant question” and “it must find its roots in the resources of that peasantry” (229). Perhaps, for Trouillot, Lavalas may have offered the possibility of some kind of “solution” to the deeply-entrenched crisis that he analyzes as having afflicted the country almost from the moment of its birth.

It’s important to note, however, that the role that Trouillot argues for the Haitian peasantry is quite different from that taken by peasants in just about any other Latin American country. Indeed, though it is to be welcomed that Haiti is now (finally) being studied as part of Latin America, and not utterly ignored as has been the predominant tradition, Trouillot’s book does also demonstrate the significant ways in which Haiti’s history and social and political structure have long been very different from the Latin American mainland, or indeed the rest of the Caribbean. Above all, it seems clear that social struggles in Haiti have not primarily revolved around the ownership of land.

Whereas in most of Latin America throughout the nineteenth century and up until fairly recently, the prime source of social conflict has been the disparity between large (often absentee) landholders and subsistence farmers, this does not appear to have been the case in Haiti. Here, in Trouillot’s account, the Revolution decisively destroyed the power of the landlords. Against even the desires of the so-called leaders of the Revolution, who “all agreed on the need to maintain largescale export-oriented plantations,” the former slaves utterly refused such an arrangement: “they knew that the plantation system was close to slavery and they rejected it” (49). Hence very early on land was redistributed to the peasants, although this did not of course necessarily mean an end to economic or social inequity: the elites “surrendered land in order to win control of the state” (48). In so far as landlords became rulers, however, they did so as “often nothing but rulers” (76).

What resulted, then, was what Trouillot terms a “republic for the merchants” in which the state gained a high degree of autonomy (and hence separation from civil society), its relations with the peasantry mediated through the merchant class, and its exploitation exercised through taxes, particularly export taxes levied at the custom houses. “It is thus fair to say,” Trouillot concludes, “that the landlords have remained, since the 1840s, in the shadow of the alliance of rulers and merchants, never again becoming an autonomous social force” (78).

In a subsequent post I will look at the conclusions that Trouillot draws from this anomalous social structure, which enables the face-off between state and nation that he sees coming to a head under the Duvaliers. I will also examine how this relates to the concept of hegemony that Trouillot employs, and particularly to Laclau (who provides the book with one of its blurbs, but I will argue singularly inappropriately).